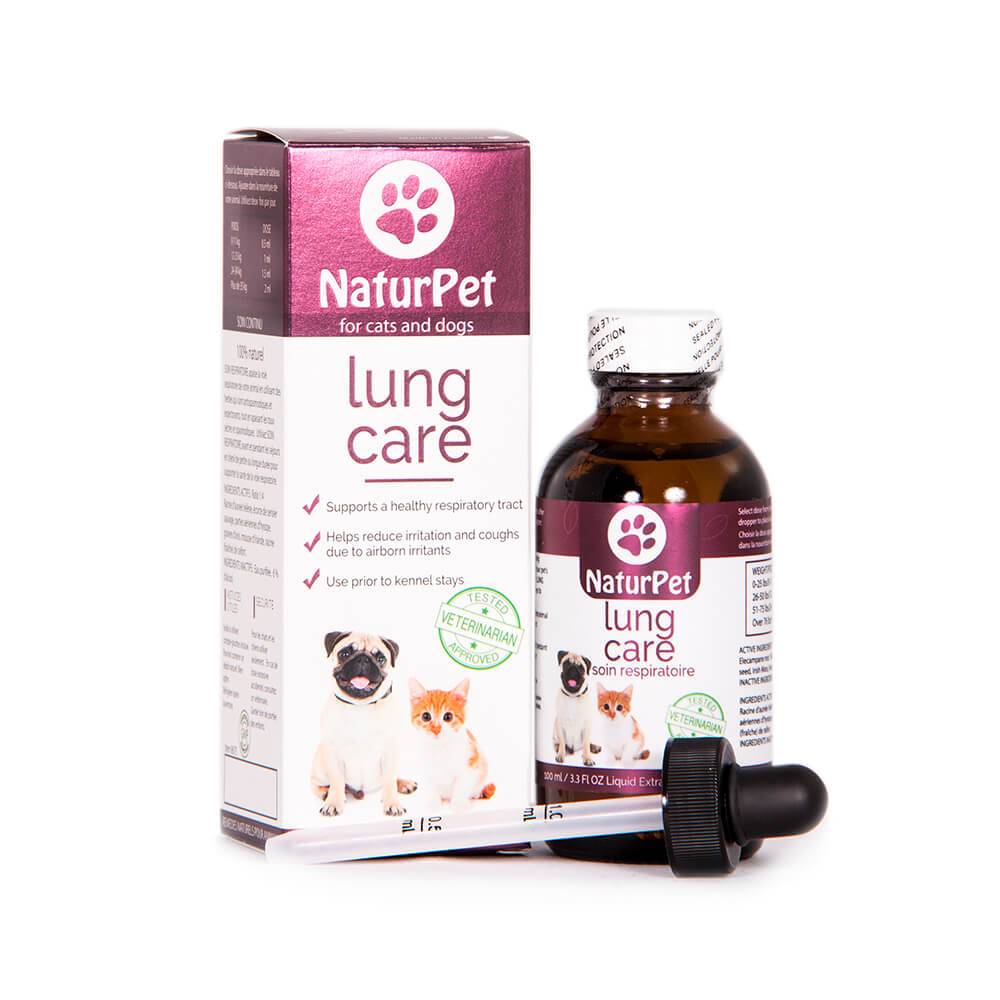 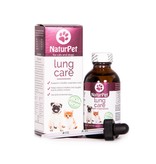 • Helps with a variety of respiratory conditions including asthma, kennel cough, and para-influenza.

• Safe to use long term for pets with more chronic respiratory conditions.

Our pets can develop coughs, sneezes, and wheezes just like the rest of the family. NaturPet knows that you want your pet sniffing not sniffling, so we developed LUNG CARE. NaturPet’s LUNG CARE is an oral remedy with active and preventative ingredients for respiratory conditions. Humidifiers help pets too! Moisture helps to soothe irritating coughs and also protects fragile membranes. Exercise can help to “clear the lungs” and increase lung capacity. Keep exercise gentle if your pet is struggling from coughing spasms. Use prior to/during stays in a kennel or cattery to help protect against exposure to Kennel cough or other respiratory infections.

Elecampane root (Inula helenium)
Elecampane has been used specifically for lung complaints in Europe for hundreds of years. The beneficial constituents of Elecampane include the sesquiterpene lactone, alantolactone along with inulin and mucilage, which have expectorant properties. This herb excels when combined with other herbs in a blend, as it provides substantial cough prevention and is an expectorant accompanied by a soothing action.

Wild Cherry bark (Prunus serotina)
Wild cherry bark has been used worldwide as a traditional treatment for coughs and lung inflammation. The bark contains cyanogenic glycosides, particularly prunasin,which research has proven to reduce and relieve coughing spells due to bronchial spasms by stopping spasm of the smooth muscle lining located in the bronchioles. Wild cherry bark also thins mucous allowing it to be more easily removed.

Hyssop aerial parts (Hyssopus officinalis)
Use of hyssop is truly ancient as it is mentioned even in the Old Testament of the Bible. It’s most traditional usage is for mild to moderate irritation of the respiratory tract accompanying colds as well as its mild expectorant action due to hyssop’s volatile oil. These properties make it valuable for coughs, asthma and bronchitis.

Anise seed (Pimpinella anisum)
The active constituents contained in anise are found in the volatile oil of the seed. The oil contains terpenoid anetholes which have anti spasmodic properties useful for treating dry or spastic coughs.

Irish moss (Chondrus crispus)
This seaweed has formed the core of numerous lung and respiratory tract health herbal formulations over the years with good reason. It not only nourishes and strengthens respiratory function but is also viable in the treatment of irritating coughs, bronchitis and many other lung conditions. It has the ability to thin mucous as well as reduce inflammation in all mucous membranes. Its primary role has been to help decrease recovery time from serious lung conditions such as tuberculosis and pneumonia. Recent research has indicated it can also be valuable as an antiviral against the mumps and influenza B virus possibly due to its polysaccharide content, a known immune stimulant. 55% of Irish moss is mucilage, a substance used to coat and sooth mucous membranes, and therefore it is classed as a demulcent. The high mucilage content makes the formula thick and syrupy which helps the blend to coat and sooth when swallowed.

Horseradish root, fresh (Amoracia rusticana)
Modern research has revealed that the volatile oils contained in Horseradish have substantial antibiotic benefits which could account for its value in treating respiratory tract infections. This herb has expectorant properties and also acts as a nasal and bronchial dilator.